“For the grace of God that brings salvation has appeared to all men, teaching us that, denying ungodliness and worldly lusts, we should live soberly, righteously, and godly in the present age, looking for the blessed hope and glorious appearing of our great God and Savior Jesus Christ, who gave Himself for us, that He might redeem us from every lawless deed and purify for Himself His own special people, zealous for good works. Speak these things, exhort, and rebuke with all authority. Let no one despise you.”
‭‭Titus‬ ‭2:11-15‬ ‭NKJV‬‬

I have found myself pondering the opposing gates to destruction and heaven. Here in America, we have come to deceive ourselves into believing that the gate that leads to God is a broad gate, and that the gate to hell is merely mythical, for a loving God would never send anyone to hell.

We also think that the path is not relevant to those who know the Lord.

In truth, the gate to heaven is truly narrow, and it is of rough terrain, featuring many pitfalls in which the unprepared can fall into and be lost.

It is fortunate for the follower of Jesus, that the Lord has provided grace that brings salvation, and has given us His Holy Spirit, with which we are able to discern the word, and receive the empowerment and preparation to resist the enticements to run after worldly lusts.

Reading Titus chapter two, this morning, I was reintroduced to the characteristics of a healthy church, made up of healthy believers. One of the characteristics of those who choose to follow the narrow path, is the voice to defer the pleasures of the flesh, to proceed in a godly life, “soberly, righteously, and godly in the present age,” even as the world presses in on us, seeking to persuade us to go with the flow.

I must admit, that my life features few of the pleasures of humanity, for the Lord has both transformed my heart and mind, and made my body incapable. He has given me a laser beam focus on Him, on His word, and a vision of what is to come. Though my life is filled with suffering, I lament not, for I know that the Lord has an oncoming glory awaiting me.

“For I consider that the sufferings of this present time are not worthy to be compared with the glory which shall be revealed in us.”
Romans 8:18 NKJV

I willfully and joyfully suffer the deferment of earthly pleasure, that I know the eternal joy I will know with the Lord Jesus. I tell you the truth, there is NOTHING in this world that comes close to what is in store for those who are looking forward to the appearing of the Lord, and are faithful to walk the narrow path.

Brothers and sisters, we are at a point of decision. Many of us have found ourselves on that board path, having opted for the comfort of the flow. We have allowed many little compromises that have caused us to be at best, lukewarm, at worst, lost and destined for the outer darkness. Those who have come to know the Lord at some point are saved, but their inheritance is at risk.

The Lord Jesus Christ has cautions for those who are not cold or hot, for they are an offense to Him.

““And to the angel of the church of the Laodiceans write, ‘These things says the Amen, the Faithful and True Witness, the Beginning of the creation of God: “I know your works, that you are neither cold nor hot. I could wish you were cold or hot. So then, because you are lukewarm, and neither cold nor hot, I will vomit you out of My mouth.”
Revelation 3:14-16 NKJV

Such is the American Evangelical church today. We are seeking entertainment and not sacrifice, desiring our pleasure over the desire to glorify the one who saves us. We have comforted ourselves with sitting passively in our pew on Sunday. Though our bodies are there, and we mouth the words of worship songs, our hearts are far from the Lord.

“‘These people draw near to Me with their mouth, And honor Me with their lips, But their heart is far from Me. And in vain they worship Me, Teaching as doctrines the commandments of men.’ ””
Matthew 15:8-9 NKJV

The commandments of men. So many things we emphasize in the church are not of God, but of the flesh.

The greatest danger is that those who opt for the broad path, those who know the Lord, will find themselves cast into the outer darkness. Imagine standing outside a house having a grand party. The main room, visible through the windows, is lit and full of merry making, but you are outside, looking in, for you were not invited.

Such will be the fate of those who have taken the broad path, and eschewed holiness. Because you once believed, you are spared hell, but because you fell, you have not access to the New Jerusalem and throne room of God.

““And behold, I am coming quickly, and My reward is with Me, to give to every one according to his work. I am the Alpha and the Omega, the Beginning and the End, the First and the Last.” Blessed are those who do His commandments, that they may have the right to the tree of life, and may enter through the gates into the city. But outside are dogs and sorcerers and sexually immoral and murderers and idolaters, and whoever loves and practices a lie.”
Revelation 22:12-15 NKJV

Let us, my people, seek to defer the pleasures of this world, that are outside of what the Lord has defined for the followers of Jesus. Let us say no to sin, say yes to righteousness. May we be bold and correct ambassadors for the Lord Jesus Christ, as we go and tell of the Good News, that Jesus died for for sins, was buried and rose again.

“Moreover, brethren, I declare to you the gospel which I preached to you, which also you received and in which you stand, by which also you are saved, if you hold fast that word which I preached to you—unless you believed in vain. For I delivered to you first of all that which I also received: that Christ died for our sins according to the Scriptures, and that He was buried, and that He rose again the third day according to the Scriptures,”
I Corinthians 15:1-4 NKJV 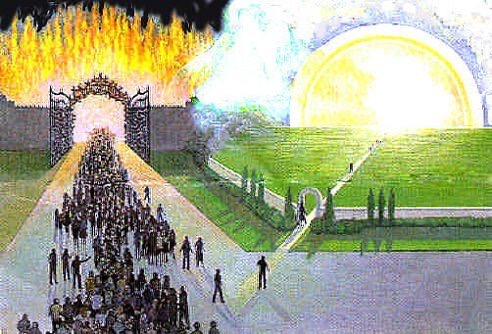 One thought on “Pleasure deferred”