“Beloved, do not think it strange concerning the fiery trial which is to try you, as though some strange thing happened to you; but rejoice to the extent that you partake of Christ’s sufferings, that when His glory is revealed, you may also be glad with exceeding joy. If you are reproached for the name of Christ, blessed are you, for the Spirit of glory and of God rests upon you. On their part He is blasphemed, but on your part He is glorified. But let none of you suffer as a murderer, a thief, an evildoer, or as a busybody in other people’s matters. Yet if anyone suffers as a Christian, let him not be ashamed, but let him glorify God in this matter. For the time has come for judgment to begin at the house of God; and if it begins with us first, what will be the end of those who do not obey the gospel of God? Now “If the righteous one is scarcely saved, Where will the ungodly and the sinner appear?” Therefore let those who suffer according to the will of God commit their souls to Him in doing good, as to a faithful Creator.”
‭‭I Peter‬ ‭4:12-19‬ ‭NKJV‬‬

Suffering comes to the house of God.

Life on earth is spiraling out of control. Each passing day brings a bit more troubling news, and a deepening sense that we are most definitely no longer in Kansas. We are seeking the beginnings of God’s judgement on the world. I consider this observation with both excitement and trepidation, as I know that what the Lord is going to do is king to start in the household of God.

I thought it timely when I read I Peter chapter fourths morning, as I am see the Lord begin His work even in the church. Many assemblies are seeing their numbers fall, and I am praying for many a discouraged pastor who has dealt with increased sin and conflict in the flock.

The trials are coming.

In my own life the trials have been God’s way of helping me to clarify my walk of faith, and cleanse myself of things that may not be grievously bad, but causing a drag on my life, inhibiting my ability to share the Gospel. When I look at the greater body of Christ, particularly here in America, I can see how many small things have crept in and slowly diluted our due diligence in seeking the Lord.

I think of some of the new age practices, like enneagrams and essential oils, and then there is prosperity teaching, and a host of other non biblical practices and that have been added to what was meant to be a simple faith. We need clarity. Clarity often comes through suffering.

God has provided His word as the ultimate guide, as humanity has a tendency to drift toward things outside of the will of God. He has raised up people to equip the followers of Jesus, in the hope of avoiding the problems that making the faith of the American church shipwrecked. All too often, even the teachers and leaders can become corrupted.

“And He Himself gave some to be apostles, some prophets, some evangelists, and some pastors and teachers, for the equipping of the saints for the work of ministry, for the edifying of the body of Christ, till we all come to the unity of the faith and of the knowledge of the Son of God, to a perfect man, to the measure of the stature of the fullness of Christ; that we should no longer be children, tossed to and fro and carried about with every wind of doctrine, by the trickery of men, in the cunning craftiness of deceitful plotting,”
Ephesians 4:11-14 NKJV

From my prayer chair, I am able to witness the struggles of my fellow Christians, as we live in this sinful world. I am sure that many of them are wondering why these things have to happen, why trials come. In my own struggles, I am reminded that my Savior Jesus endured far greater humiliations than I have, yet had the power to stop it. He did not, and chose to endure, that those who call upon His name can have the forgiveness of sins.

As the persecution comes, and pain of trials can seem to overwhelm, let us remember that we have a destiny. Let us also remember that we are His people, and the Lord chastises His children.

“And you have forgotten the exhortation which speaks to you as to sons: “My son, do not despise the chastening of the Lord, Nor be discouraged when you are rebuked by Him; For whom the Lord loves He chastens, And scourges every son whom He receives.” If you endure chastening, God deals with you as with sons; for what son is there whom a father does not chasten? But if you are without chastening, of which all have become partakers, then you are illegitimate and not sons.”
Hebrews 12:5-8 NKJV

Even in the most severe chastening, we can have security in knowing that God is for us. Those in the world will receive judgement the world has never known, when the Lord Jesus returns to reclaim the world.

Brothers and sisters, those who know the Lord with us, around the world, are even now, and have been, experiencing what we are about to face. They are praying for us. Know that your God is for you, and with you and in you. You will not be forsaken.

““I know your works, tribulation, and poverty (but you are rich); and I know the blasphemy of those who say they are Jews and are not, but are a synagogue of Satan. Do not fear any of those things which you are about to suffer. Indeed, the devil is about to throw some of you into prison, that you may be tested, and you will have tribulation ten days. Be faithful until death, and I will give you the crown of life. “He who has an ear, let him hear what the Spirit says to the churches. He who overcomes shall not be hurt by the second death.” ’”
Revelation 2:9-11 NKJV

“Go therefore and make disciples of all the nations, baptizing them in the name of the Father and of the Son and of the Holy Spirit, teaching them to observe all things that I have commanded you; and lo, I am with you always, even to the end of the age.” Amen.”
Matthew 28:19-20 NKJV 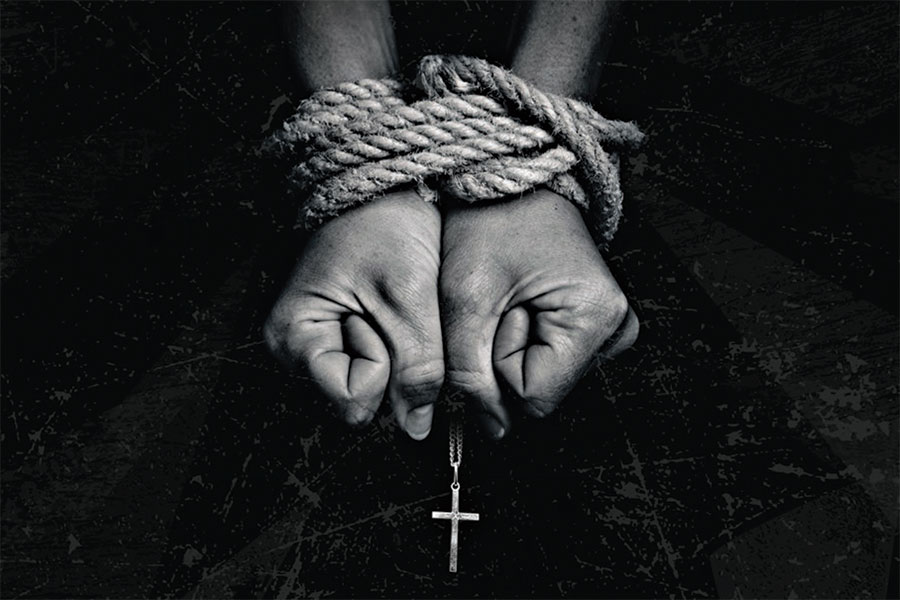 2 thoughts on “Suffering comes to the house of God”